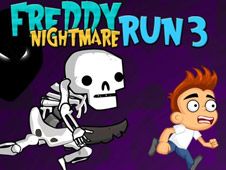 What is Freddy Run 3?

The Freddy Nightmare Run Games series is one of the most beloved action-adventure games series on our website, and it has now reached the point of becoming a trilogy, with the third game in the series now having been made available to you, where we hope that once again you are ready to help Freddy run away from his nightmares!

Run, jump, and duck using the four arrow keys, and when you have the necessary power and ammo, use the X key to shoot your enemies. There will be a total of eight levels for you to pass, one more difficult than the other, but that rising difficulty also makes the game way more exciting!

Run through the haunted alleys of the castles, where you can jump on top of the scorpions, but need to shoot skeletons, ghosts, other more dangerous creatures. Make sure not to fall into pits, hit the spikes, or get touched by enemies, since that means losing a life each time, and losing all lives means losing the game too.

Before reaching the end of each level, give it your best to collect as many coins as possible from them, in order to increase your score, while also being on the lookout for bonus items and power-ups. It's all that simple and fun, so we hope you begin your run right now, you won't regret it!

Use the arrow keys, X key.