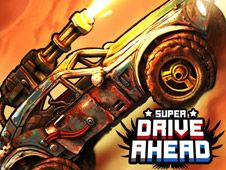 What is Super Drive Ahead?

Play Super Drive Ahead if you are a bit tired of the regular online games with cars that you might have become used to playing on our website, since this is more of an action game than a driving game, where two cars fight one another in an arena, so it's you against the computer in a battle of metal!

Look ahead, attack, and become the super driver!

For starters, know how to control your car: use the right and left arrow keys to move, press the spacebar for a power boost. From the shop, using the coins you earn, you can buy new cars down the road, or power-ups such as mines, spikes, and others.

The two cars in an arena will then try hitting each other harder than the other one, so try depleting the enemy's health bar as fast as possible, since when theirs is empty you will have won a round. Win three rounds first to be the winner.

Inflicting damage on the enemy car can also reward you with coins that are dropped along the way, so be on the lookout to grab them. Good luck, we wish you all the best, and invite you to try out more of our games after this one too!