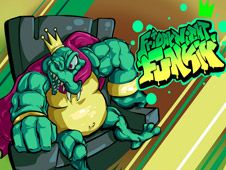 What is FNF vs King K. Rool Mod?

King K. Rool is now in FNF for you to beat him in a rhythm battle, and if you don't know who he is, he is a raged crocodile king who is the main antagonist featured in the Donkey Kong series, who you will now have to face off against in quite an extensive list of songs:

Choose between the story mode and free play mode, and, then, no matter what you pick, give it your best to reach the end of the songs by playing all their notes according to the charts, meaning that when you see arrow symbols above BF match one another, you will press the identical arrow keys.

Keep at it, but be careful not to miss hitting too many notes in a row, since that leads to you losing. Good luck, and see what other great games this category has still to offer!