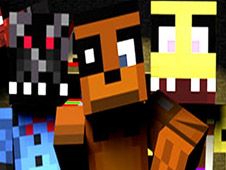 What is Five Nights in Minecraft?

Five Nights in Minecraft manages to combine Minecraft Games with FNAF Games online in the best way possible, which is why missing to share this game with you all was not something that we wanted to do, since we know that we have plenty of fans of both the categories and many of you will love it even more when you try to survive the pizzeria, now with blocky characters!

Can you survive Five Nights in Minecraft? Let's try!

Freddy's has now become Stevie's, and this world will be pixelated and made out of blocks just like that of the original open-world game, but just like the horror one, you have to survive five nights in a row as the security guard in this restaurant, because dangerous enemies want to kill you night after night.

There are two doors, one on the left, one on the right, and you can open them up and close them as well as start or stop lights in those hallways using the mouse by clicking on the two buttons to the sides.

Alternate between these actions to prevent the deadly enemies from reaching you, while also being careful to not lose all the power before the night ends, since then it will be mayhem and most probably get killed. Enjoy!