FNF vs Crewmate (Among Us) 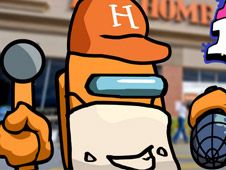 What is FNF VS Home Depot Crewmate?

While at Home Depot in FNF, Boyfriend found a cashier that is actually an Orange Crewmate, and the two started fighting one another through music, so come help our protagonist win this battle once again, this time on some fresh songs:

In both the story mode and free play mode, you win by reaching the end of the songs, and to do that you need to keep hitting your notes according to the charts.

This means that you watch for when arrow symbols float and match above BF's head, and press the identical arrow keys at the same time. Don't miss doing that too many times in a row, or you have to start again from scratch.