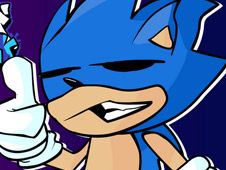 What is FNF vs Sonk Sonic?

Sonk Sonic is the new blue hedgehog with super-speed that you have to defeat in our FNF Games category, where he is most welcomed and always makes an appearance, and this time he is doing it in this new version with three songs, all for a full week, with the tracklist being the following one:

From the main menu you have to make a choice between the story mode and free play mode, but no matter which one you pick, to win you have to do the same thing, which is reaching the end of the songs by playing all their notes according to the charts.

That is done by pressing arrow keys at the same time as the identical arrow symbols float and match above BF's head. Don't miss doing it too many times in a row, or you lose and have to start again from scratch. Good luck and all the best we wish you all!