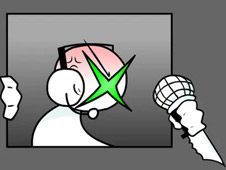 What is FNF: GAMER RAGE FUNKIN: Vs. Angry XBOX User?

FNF: GAMER RAGE FUNKIN: Vs. Angry XBOX User is a really interesting mod where BF and one of his XBOX opponents got into a fight after a Call of Duty match, with you now having to help our protagonist defeat this noob in music, not just shooting, on the song called 'Gamer Rage'.

Let's defuze the gamer range of the Xbox user with FNF music!

As the song progresses, press arrow keys at the identical time as arrow symbols float and match above BF, because that is how you hit notes, and if you keep hitting your notes until the song's conclusion, you win. If you miss hitting notes, you lose instead. Good luck, enjoy!