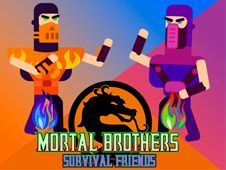 What is Mortal Brothers Survival Friends?

Mortal Brothers Survival Friends is an action-adventure game with platforms and puzzle-solving which is heavily inspired by Mortal Kombat Games, mainly because the two characters that you will take control of look a lot like Scorpion and Sub-Zero, who have always been mortal enemies, but these two need to band together as friends, since only together will they be able to escape from the dungeon they have been imprisoned in.

Help the Mortal Brothers become friends and survive together!

First, let's teach you the controls: use left and right to move, up to jump, space to change between the two characters, and E for action, which can mean various things depending on where you are at.

Even if only one of the brothers dies, you lose the level nonetheless. In some spots you need to pull levers, sit on buttons, climb stairs, and other actions to get past obstacles and traps, so figure out the best strategy so both characters can advance.

Reach the end of one level to advance to the next one, where you will have a more difficult maze dungeon, but the bigger challenge will also make things more fun. Enjoy!