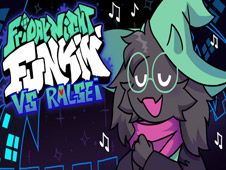 What is Friday Night Funkin vs Ralsei?

Friday Night Funkin vs Ralsei is yet another FNF mod featuring this character from Deltarune, who has appeared here many times before, but never before with this tracklist, which features three brand new songs for you to enjoy doing battle on:

BF Vs Ralsei, a new FNF x Deltarune crossover you need to play!

Whether you face this character in the story mode or free play mode, to win you have to do the same thing, which is reaching the end of the songs by playing all their notes according to the charts.

Watch for when arrow symbols float and match above BF, and press the identical arrow keys at the same time. Don't miss hitting the notes too many times in a row, or you have to start again from scratch. Good luck, enjoy!