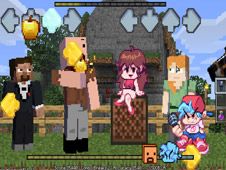 What is FNF vs Minecraft Steve (Pre Final Update)?

The Pre Final Update of FNF Vs Steve mod has just dropped on our website, with plenty of updates and cool new stuff in the graphics, songs, gameplay, and all-around experience, with us hoping you will be having tons of fun with the blocky rhythm battle on all the songs in the tracklist:

FNF vs Minecraft Steve has reached its Pre Final Update, try it out!

Whether playing in the story mode or free play mode, winning is done in the same way, by reaching the end of the songs, so when you see arrow symbols float and match above BF, that is when you need to press the identical arrow keys to hit your notes. Don't miss doing it multiple times in a row, or you need to start again from scratch. Good luck!