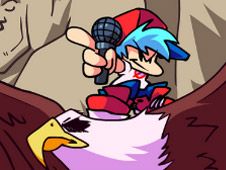 What is FNF vs American Founding Fathers (FATHER FOUNDEST Mod)?

Get ready for the most American FNF mod ever, FATHER FOUNDEST, where Washington, Lincoln, and other founding fathers of the USA have become musical antagonists for Boyfriend in this full week mod with no less than four songs:

BF Vs the American Founding Fathers, a musical battle of FREEDOM!

Whether you play in the story mode or free play mode, winning is only achieved when you reach the end of the songs, and that is possible by playing all your notes according to the charts.

So, when you see arrow symbols float and matcha above BF, that is when you press the identical arrow keys. Keep at it, but know that missing multiple notes in a row will lead to you losing. Enjoy!