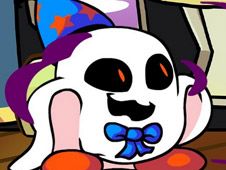 What is FNF vs Doopliss?

FNF's Doopliss is a ghostly character with a magician suit that has now come to haunt Boyfriend with music, so you and the protagonist need to defeat him right now and here in a rhythm battle on the song called 'Slick Trickery'.

BF Vs Doopliss, a man vs ghost rhythm battle of FNF!

To win you need to reach the end of the song, and to do that you need to keep hitting your notes until its conclusion, so when you see arrow symbols float and match above BF, that is when you have to press the identical arrow keys and keep doing it until the progress bar is fully towards you.

Of course, missing notes too many times in a row ruins the chart and forces you to start again from scratch, because you will have lost, so focus not to let that happen. Good luck, enjoy!