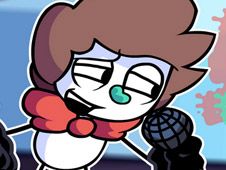 What is FNF Vs Saltydkdan (Salty Friday Night)?

Saltydkdan is a popular comedy YouTuber whose avatar will now have made his debut in our world of FNF Games, where you have to battle it together with Boyfriend on the song called 'Salty'!

Let's get FNF salty with Saltydkdan!

Watch for the moments when arrow symbols float and match above BF's head, and at the exact same moment you need to press the identical arrow keys to hit your notes, something that you need to keep doing until the progress bar tilts towards you and the song finishes to win. If you miss too many notes, you lose, so be careful. Good luck, and have fun!