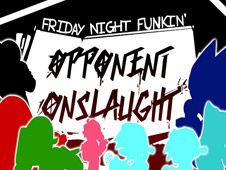 What is FNF vs Opponent Onslaught?

FNF vs Opponent Onslaught is a rather difficult mod where BF has to face one antagonist after another, as they come out from a portal in the street, which is why this game features characters like Miku, Senpai, Majin Sonic, Beepie, Impostors, and more! Also, for each opponent you've got their own original track, making this even better:

Whether you are playing in the story mode or free play mode, winning is achieved in the same way, by reaching the end of the songs and to do that you need to hit your notes according to the charts, so that you reach that conclusion and make the progress bar fully move towards you.

To hit said notes when arrow symbols match above BF's head, that is when you need to press the identical arrow keys to hit your notes. Don't press the wrong keys, or press the correct ones too late or too soon, since that means missing a note, and missing multiple notes in a row leads to a loss. Good luck, all the best we want to wish you all!