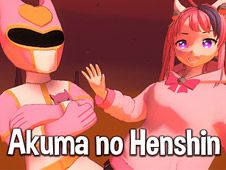 What is Akuma no Henshin?

Akuma no Henshin is our first-ever VTuber game online we are happy to bring you all here free of charge, and it was only fitting that we would start off this category in high-gear by featuring a game with the world's most popular virtual anime girl who streams, and that is IronMouse from VShojo, who now needs your help to defeat the Super Sentai in a one-on-one combat fighting game!

Akuma no Henshin: help IronMouse win all her fights!

In this 3D-rendered game, evil creatures have invaded hell, which IronMouse rules over, and she dons a Power Ranger-like suit to beat up the intruders, which will be various trash cans and bins in the first fight.

Use the WASD keys to move around, jump to space, the left mouse button to punch, the right one to kick. Combine the mouse buttons with the other keys to create all sorts of combos and incredible fighting moves for Mousey to use.

Help her defeat all the enemies that enter the arena with her, while protecting her health bar because if she gets hit too many times and her health bar depletes, you and she lose, and you surely wouldn't want that, but want to make a great team and win! LET'S GOOOOO!

Use the WASD keys, spacebar, mouse.