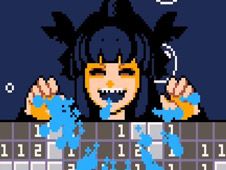 What is Artemis' Minesweeper?

The only thing that could bring back the Minesweeper game from the grave of gaming is a VTuber girl playing it, or you playing it with her, because these virtual anime girls have simply taken over the world of streaming, and now they are about to be in games as well, with us inviting you to have tons of fun with this fan-made one we highly recommend!

Numachi Tamanegi is here to play Minesweeper with her!

Use the mouse to click on the brackets on the screen, the goal being to reveal numbers, doing so until all of the numbers have been revealed, both on columns and rows. The catch is to be careful with spots where bombs appear because if you reveal those and explode, you might lose instantly.

If you figure out the safe numbers and logic to the numbers, you will be able to identify where mines are, and step away from them, not on them and lose. The game is pixelated, retro, and fun from start to finish, so missing out on it is not something we hope you do, but instead give it a proper chance right now!