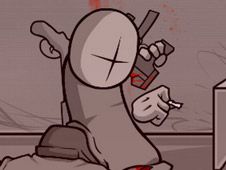 What is FNF Redemption vs Grunt?

The Grunt from Madness Combat is back in FNF to get his redemption against Boyfriend for losing last time, but as it is tradition, you are here to help the blue-haired protagonist win, and you are going to do it on the demo song called 'Revenge'!

Defeat the Grunt and get musical redemption in FNF!

Use the arrow keys to hit your notes, doing so by pressing them at the same time as the identical arrow symbols match above BF's head, but know that if you miss doing it multiple times in a row, you lose and have to start again from scratch. Good luck and all the best we want to wish you all, as usual!