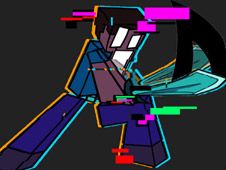 It seems that even Minecraft's Steve could not escape the Pibby virus and got corrupted, but we will now attempt to bring it out of him by defeating him right now in a rhythm battle on one song only!

Watch as arrow symbols float and match above BF, and when they do, press the identical arrow keys to hit your notes. If you can hit your notes until the song ends, you win, but if you miss doing it too many times in a row, you lose. Good luck, have fun, and stick around for more awesome content still on its way!