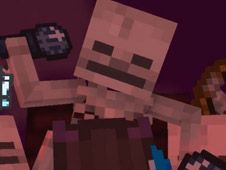 What is FNF Vs JellyMid (Jellybean Minecraft Style)?

The FNF Vs JellyMid (Jellybean Minecraft Style) mod is here to once again prove why FNF x Minecraft crossovers are some of the best new games we offer you here, and right now you can go up against this new character in blocky-style with the following songs:

BF Vs JellyMid, a new Minecraft battle of music!

Whether in the story mode or free play mode, winning is achieved in the same way, and that is by reaching the end of the songs by playing their notes according to the charts.

How do you do that? Well, when you see arrow symbols float and match above BF's head, that is when you press the identical arrow keys to hit your notes.

Keep on doing it without missing too many notes, and you win. Missing multiple notes from the charts in a row means losing. Good luck, enjoy!