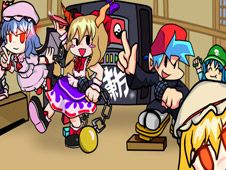 What is FNF Broken Moon?

Friday Night Funkin' has received a Tohou makeover, with which this series has been combined before, but this is definitely the most expansive one yet, as it features no less than 16, yes SIXTEEN songs:

Make a choice between the story mode and free play mode, and in either case, win by reaching the end of the songs, which you do by playing your notes according to the charts.

How? Well, when the arrow symbols float above BF's head, that is when you hit the arrow keys of the same kind to hit your notes. Don't miss hitting keys too many times in a row, or you lose. Good luck, enjoy!