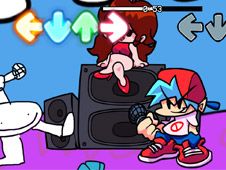 What is FNF vs Spoinky Boingy?

Spoinky Boingy is a Bob lookalike that has challenged Boyfriend to a rhythm battle, so right now you're invited to go up against him and show this funny stick figure character who is the real musical boss here, defeating him on all the following songs:

Make your choice between the story mode and free play mode from the game's main menu, and then give your best to reach the end of the songs by hitting your notes according to the charts. How do you do it? You press arrow keys at the same time as the identical arrow symbols match above his head.

If you miss hitting notes multiple times in a row by pressing the wrong keys, or pressing the correct ones too late or too early, you lose, so focus and win instead! Good luck and all the best we want to wish you all!