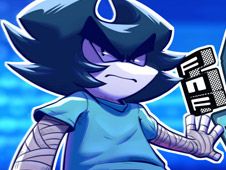 What is FNF Arcade Date: 1ST MIX vs Pointy?

On an arcade date with GF, BF now has to have a rhythm battle against a new character called Pointy that considers himself a DDD master, so defeat him right now and show him who is boss on the following tracks:

Let's win against Pointy and continue the FNF Arcade Date!

Make your choice between the story mode and free play mode in the game's main menu, and then, in either case, give your best to reach the end of the songs by hitting your notes according to the charts, which is how you win.

To do that, press arrow keys at the same time as the identical arrow symbols match above BF's head. Miss doing it too many times in a row and you lose, so good luck and all the best we wish you!