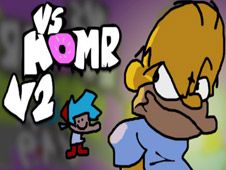 A full FNF Homr is now available for you to play free of charge on our website, where your antagonist is none other than Springfield's Homer Simpson, the beloved cartoon character, a character you now have to defeat on the following tracks:

From the main menu, you have to make a choice between the story and free play mode, but in either case, winning is achieved by reaching the end of the songs, and that is done by hitting your notes according to the charts.

To do it, when you see arrow symbols match above BF's head, press the identical arrow keys from your keyboard to hit the notes. Be careful not to miss hitting them too many times in a row, or you lose and have to start again from scratch. Enjoy!