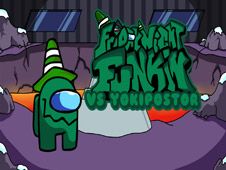 What is FNF Vs Yokipostor Mini Cone?

A sus green impostor is the newest antagonist that you and BF have in this rhythm battle of FNF, where we invite you to have tons of fun against this mini cone on the following songs:

Whether you are playing in the story mode or free play mode, reach the end of the songs by hitting your notes according to the charts, which is how you win.

So, when you see the arrow symbols matching above BF's head, that is when you press the identical arrow keys. Don't miss hitting the notes multiple times in a row, or you end up losing, of course!