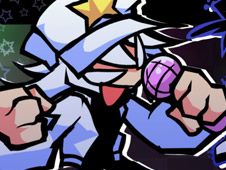 What is FNF Vs. Kite?

Kite really wants to prove himself to FNF's Boyfriend as a musical expert, so he now finally has his chance by throwing it down in a rhythm battle against our protagonist, so help him once again remain the king of music by defeating this new rival on a few awesome songs:

FNF: Boyfriend Vs Kite, a battle of generations!

Whether you are playing in the story mode or free play mode, know that to win you have to do the same thing, and that is hit your notes according to the charts until the songs conclude.

So, when you see arrow symbols match above BF's head, that is when you press the identical arrow keys. Be careful not to miss doing it too many times in a row, or you lose and have to start again from scratch. Good luck, enjoy!