FNF Vs. Jinx the Cat 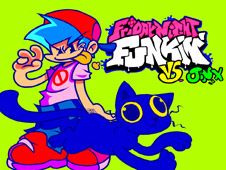 What is FNF Vs. Jinx the Cat?

Jinx the Cat is the latest furry antagonist that you and BF have to defeat in a rhythm battle in the world of awesome FNF Games, something we know for a fact just how much you love doing, with this game having three awesome short songs for you:

Defeat Jinx the Cat from FNF, with music!

After making your choice between the story mode and free play mode, in either case, reach the end of the songs by playing your notes according to the charts in order to win, without missing hitting the notes too many times in a row, because if that happens, you lose and have to start again from scratch.

To hit your notes you need to press the identical arrow keys to the ones that match above BF's head when they do, simple as that. Good luck and all the best we wish you, inviting you to have tons of fun as always!