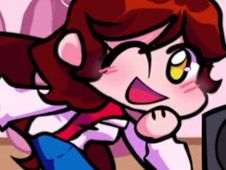 What is FNF vs Taeri?

FNF's Taeri is a fan-girl who looks just like Girlfriend, and you would even make the mistake of confusing them if you saw them on the street, but Boyfriend won't since he loves GF more than anything, which is why he will now defeat this lookalike in this rhythm game, with your help, on the following tracks:

BF Vs Taery, the GF fan-girl!

After choosing between the story mode and free play mode, in either case, give your best to reach the end of the songs by playing their notes according to the charts, which is how victory is achieved.

To play your notes, press arrow keys simultaneously as the identical arrow symbols match above BF's head. If you miss doing that multiple times in a row you lose, so be careful not to, and win instead. Good luck, enjoy!