The Freaky Night Of Halloween

Shaun the Sheep: Spot the Difference 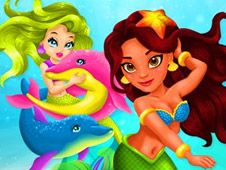 What is Undine Match the Pic?

Undine Match the Pic is one of the best differences games for girls to have been added here for you all, which is great since most of them here are general ones, but these ones feature cute mermaids under the sea, but that does not mean that boys should not play it, as we invite everyone to have a great time noticing all the differences!

Match the Pic with the Undine mermaids!

There are six levels in total, each of them featuring a different mermaid in two side-by-side pictures that might seem identical at first sight, but between them, there are actually a number of differences, with there being more for further levels.

Each level needs to be completed before the time given for it runs out, and try being fast to get three out of three stars for each stage. Carefully look at the two pictures and then click where you think something is different.

It's really all that simple and fun, so start right now, and don't stop here, we've got even more great games in store for you, none of them worth missing out on for anything in the world!