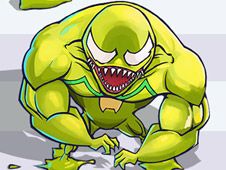 What is Slime Warrior Run?

Slime Warrior Run is an action-packed running game in 3D featuring a man turning into a slime creature that heavily resembles the one and only alien slime Venom, whom we know for sure is beloved by boys and men all over the world, who will really love this game as well!

Run with the Slime Warrior!

Use the mouse if on a PC, and the finger on mobile devices, to direct the warrior through the course, where you have to pick up as much slime as possible to create your living bodysuit, which you then use to beat up the enemies you encounter at various stages while being careful not to get hit or shot by them instead.

Don't bump into obstacles either, because they remove part of your slime, making you weaker, but always pick up more slime to keep being strong and defeat the enemies, no matter how difficult the courses get, always having a big boss to defeat at the end, such as a tank.

Let's begin all this fun only now and here, free of charge, after which we hope to see you play even more of our amazing games of the day, every day!