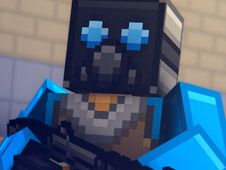 What is Blockpost Online?

Welcome to Blockpost Online, an online multiplayer first-person shooting game in 3D with a style inspired by Minecraft, as the world is pixelated and the characters are blocky, but what makes this game tick is that it gives you the chance to go up against players all over the world in a shootout like none other!

There are four modes that can be accessed here, with the fourth one needing to be unlocked:

Use WASD to move, the mouse to aim and shoot, space to jump, and the number keys to change weapons. Use the coins you win as rewards to upgrade your character's skins and their weapons so that you become stronger and are able to handle all the players from around the world!