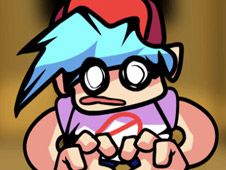 What is FNF: Broken Reality V3?

Let's try the new FNF Broken Reality mod, now in V3, which we invite you to help Boyfriend win his battles against various scary antagonists that he has found when he got trapped in The Backroom, where you are now going to have endless fun on quite a deal of songs:

Enter the Broken Reality of FNF and help BF escape the Backroom through music!

In either mode you will be playing, you need to reach the end of the songs by playing their notes according to the charts to win. This means pressing arrow keys at the same time as the identical arrow symbols match above BF's head.

Be careful not to press keys early, late, or the wrong ones, since that is how you miss notes, and if you miss multiple notes in a row, you lose and have to start again from scratch. Good luck and the best we wish you all!