FNF vs VS Trollface 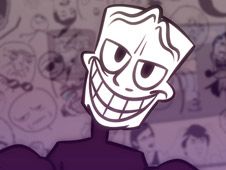 What is FNF RageComics vs TrollFace?

Our newest FNF mod called RageComics features a battle between a Derp version of BF against the iconic TrollFace, who really suits the role of antagonist, and whom you will now duel against on the following tracks:

After choosing between the Story mode and Free Play mode, reach the end of the songs by hitting their notes according to the charts, which is when you win, while being careful not to miss notes by pressing keys wrong or not pressing them at all, since you lose after too many mistakes.

This means that when you see arrow symbols match above BF, you press the identical arrow key, simple as that. Good luck and the best we wish you all, inviting you to stick around for more of our daily games to come!