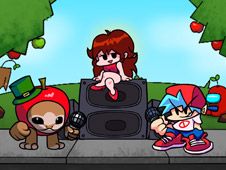 What is FNF Vs Joans (Apple Cat)?

Joans is a cut cat dressed up as an apple that we now invite you to play a rhythm battle against in one of the best new mods of the year, which presents you the really awesome following tracklist:

After making your choice between the story mode and free play mode, in either case, give your best to reach the end of the songs by playing their notes according to the charts, which is how victory is achieved.

This means that when you see arrow symbols match above BF's head, that is when you need to press the identical arrow keys to hit your notes. Don't miss doing it too many times in a row, you lose and have to start again from scratch. Enjoy!