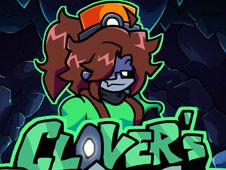 What is Friday Night Funkin’ – Clover’s Cave In?

Rageminer is the newest antagonist of the FNF Clover's Cave In mod, where right now you go up against this new character on two new brand songs:

Let's get out of Clover's Cave In of FNF!

After choosing your preferred mode, in either case, reach the end of the songs by playing their notes according to the charts, which is when you achieve victory. So, when arrow symbols match above BF, press the identical arrow keys to hit your notes. If you miss doing it too many times in a row, you lose, so focus on not letting it happen. Good luck, enjoy!