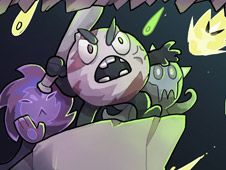 Welcome to Asterogues online (demo), a really amazing new adventure game with shooting that is reminiscent of some of the retro and classic games we're sure you have played or at least heard about in the past, with this game also having quite a unique story for you:

Pluto has been demoted as a planet, so it now has become an asteroid and has been cast out with other such space rocks from the Solar System. The only thing it wants now is revenge, so help Pluto get it!

Join the Asterogues in getting their revenge on the stars!

The game works similar to Pokemon games, for example, in as you see your characters from above, and you can interact with other space rocks and asteroids, but also items.

Move with WASD/ARROWS, tap the left mouse button for a melee attack, and hold it for the special attack. Use the right mouse button to activate items, and press the spacebar to dash. Don't lose all your lives, you lose the game as well!

Talk around with other asteroids, make friends with them, and gather your army, defeating enemies along the way until you also defeat the planets that have done you so wrong!

Use the WASD/ARROW keys, mouse, spacebar.