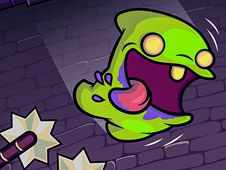 Prisonela represents one of the most hardcore platform-adventure games online with a randomized system, meaning that each level you play, even one after the other, even if you go through them because you have died and lost, will be something new, so even if you die in one kind of stage, it does not mean you start again from the same one, but a new challenge will await you. Exciting right?

This blob-like creature is controlled using the right and left arrow keys for moving, you press the up arrow key to jump, and if you press it a second time while in the air, you can make a double jump, something that you will need to do quite a lot.

Avoid falling into the green goo, where some of your friends got trapped to death in previous escape attempts, be careful of falling spikes, traps that move left and right, some sitting on the ground, and some even being placed on the ceilings.

It might sound weird, but if you reach the fire pit at the end of a level and go through it, you advance to the next level, but avoiding every danger before that will require skill, timing, and bravery so you don't ever give up, which we wish you all, as well as tons of fun!