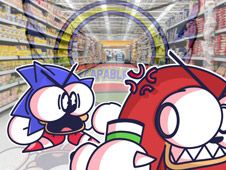 What is FNF: Inescapable Aisle (Sonk vs Knok)?

Sonk vs Knok are the two meme versions of these iconic video game characters who now have a rhythm battle in FNF on the Inescapable Aisle, as they're having a fight while grocery shopping. Let's start it!

Have an FNF duel on the Inescapable Aisle with Sonk vs Knok!

When the floating arrow symbols match above the character to the right, that is when you need to press the identical arrow keys to hit your notes and do it until the end to win, but know that missing to hit notes too many times in a row, because you will then lose. Good luck, enjoy!