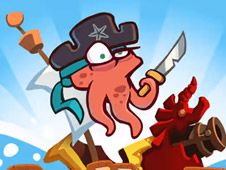 What is Sink It?

Sink It is about to become one of the top new shooting games in 2 players on our website, which gives you the chance to take part in one of the most exciting sea battles on the internet, as it is not guns that you will shoot, but cannons from pirate ships, each player assuming control of a squid pirate, which is exactly what the title suggests, a pirate who is also a squid, not a human.

Sink It: a pirate ship shooting game for two players!

If you choose to play 2P, which we recommend more, one of you aims and shoots with the spacebar, while the other one uses the enter key. Hold the keys to move the cannon's dotted line, which represents the direction, and then release them to make the shot. If you deplete the other one's life first, you win.

Only use the spacebar if you play against the computer in the 1P mode. The movements of the water and its waves will make aiming quite a bit of a challenge, but overcoming it and doing better is going to be your key to winning, so focus and never give up! Good luck we wish you both!

Use the enter key and spacebar.