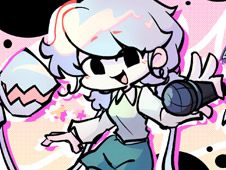 What is FNF Carnivorous Chaos vs Diane?

Diane is an alien girl coming from the Planet Venus, and in the FNF Carnivorous Chaos mod she represents your enemy, who we are sure you will have plenty of fun going up against, especially since this game features a big tracklist, meaning guaranteed fun:

Whether you choose to play in the story mode or free play mode, winning is achieved in the same way, by reaching the end of the songs, and that is done by hitting your notes according to the charts until that point, doing so by pressing arrow keys at the same time as the identical arrow symbols match above BF.

If you miss hitting the notes too many times in a row, you lose and have to start again from scratch, so focus not to let that happen, but win instead. Good luck, enjoy!