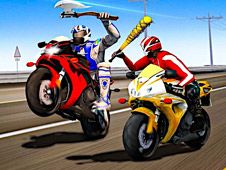 What is Biker Battle 3D?

Biker Battle 3D is here to take everything you knew about motorcycle games 3d and flip them on their head with one of the best new games in the whole category because this is not just a racing and driving game, which it is, but it is primarily a fighting game, one where the battles take place on two wheels, as you drive through the courses hitting, shooting, and smashing the members of the rival bike gang!

You start off with just one biker, bike, and a basic set of weapons, but as you just keep on clearing levels, each with a different track, you can use the coins collected in them and those earned as rewards to buy new gear, which you will need, as levels only get more difficult.

Through the courses not only do you have to reach their end, but you need to fight the other bikes you encounter and defeat them while making sure they don't kill you first instead. Obstacles and traps are also placed along the roads, so avoid them too, they are also really troublesome.

Collect coins from the courses, and grab power-ups such as magnets, which help you gather them in an easier way. Move with A, D, shoot with F, use a bat attack with T, Y, kick attacks with G, H, activate nitro with shift, and use X for slow-motion.

Surely you understood what is there to do, so let the fun begin now, and make sure to invite your friends to try the game as well, they won't regret it!