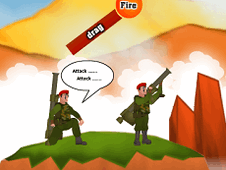 What is Bazooka Battle?

Haggai Bazooka is a powerful weapon that you have to try the new in 2 players. First you have to know your team very well have, then manage to get all that is best in you so you all get through the difficulty levels of the players and in this way to get it done war has just started Bazooka weapons. Try to defend your teammate advises you where to throw missiles as well start attacking increasingly more cars, to hit enemies, soldiers and soldiers who are in your way and shown us all that you're really a good soldier ready for such a war, a battle for life and death. After you try your luck hits you have, you'll have to leave the other two to shoot Bazooka so let's see which of you will be able to win the battle on the battle front. The battle will take place on two islands namely you war with the entire team you will be on a smaller island in the ocean, and the other group will be on the other side.

use your mouse to shoot the solders and to win the Bazooka war.