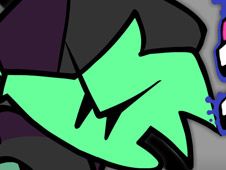 In the FNF Adobe Creations mod we enter a world created in this software, where a new version of Boyfriend needs your help to defeat various antagonists, something that you're now invited to do on the following tracks:

After making a choice between playing in the story mode or free play mode, in either case, give your best to reach the end of the songs to win, which is done by hitting your notes according to their charts until the conclusion.

To do it, press arrow keys at the same time as the identical arrow symbols match above BF, but know that missing your notes too many times in a row leads to you losing. Good luck, enjoy!