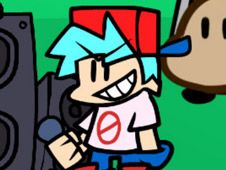 What is Terminal Night Funkin’?

Mario, Sonic, Kirby, or Fox are just a few of the characters you and Boyfriend will now face off against in the FNF Terminal Night Funkin’ mod we are now sharing with you all here free of charge, featuring the amazing following tracks:

Make a choice between the story mode and free play mode, but know that in either case, to win you need to do the same thing, which is hit your notes according to the charts until the end of the songs.

To do it, press arrow keys at the same time as the identical arrow symbols match above BF. If you miss doing it too many times and your health bar depletes, you lose. Good luck, enjoy!