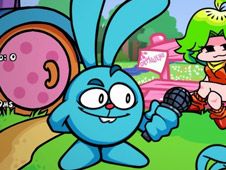 What is FNF Vs Krosh?

FNF Vs Krosh is a mod featuring this blue rabbit from the series known as Smeshariki, whom Boyfriend happened upon in his universe, so the only way to get back is by defeating him on the following songs:

Let's defeat Krosh in the newest FNF mod of our website!

Whether you choose to face this antagonist in the story mode or free play mode, to win you need to do the same thing, which is hit your notes according to the charts until the end of the songs, which is when you win, but know that missing to hit your notes multiple times in a row depletes your health bar and leas to you losing. Good luck, enjoy!