Runner: From Noob to Huggy 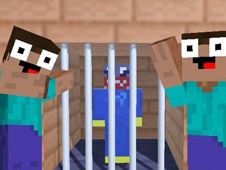 What is Noob Saving Huggy?

You will use the WASD to move Noob, and use the mouse for him to interact with the world, starting off by collecting the wood from the boxes, tapping on them to collect them, exchanging them for diamonds, and using said items to unlock all the treasure chests, which cost diamonds, in various amounts.

Why? Because only once the treasures have been gathered can you use them to free Huggy from the prison where he has been put, sort of like paying his bail? Do this in the given time, as each level happens against a timer that is slowly but surely counting down.

Good luck, we wish you simply the very best, as always, and definitely hope to see you around, since we always have more awesome games in store for you!

Use the mouse and WASD keys.