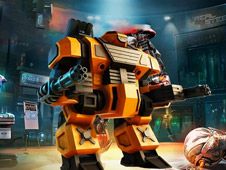 What is Real Steel?

Real Steel is a robot fighting and shooting game online in 3D inspired by the movie of the same name, where humans created robots to fight one another in the ring, and this is about what you will do here as well, which we are sure you will enjoy even more so than watching them do that in a film, as fighting games with robots are always going to be an amazing experience!

Real Steel is now a game with fighting robots, try it out!

Begin by choosing between the Titan and the Scout models available, each with a different look and abilities, but know that they can be customized between fights, changing their weapons, such as:

After that, you are going to be dropped on a map, and you need to go towards the icons marked on it so that you receive missions, where you usually need to fight other robots, with a few surprises along the way too!

Use WASD for movement, left mouse button to shoot, right mouse button for missile strikes, space to jump or fly, shift to run, and change cameras with V.

Your next futuristic adventure filled with action is just one click away, so give this game a go right now, and don't hesitate to tell your friends about them too!

Use WASD, the mouse, space, shift, and V.