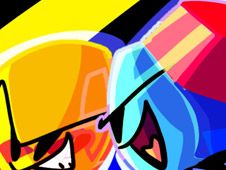 Snipperclips FIOT is a new FNF mod where Boyfriend enters this new universe, where two characters by the name of Snip and Clip become his newest antagonists, and you are invited to help him defeat them on this following tracklist:

Whether you choose to play in the story mode or free play mode, you win in the same way, by reaching the end of the songs, which you can only do by playing your notes according to their charts until that point.

To do it, press the arrow keys at the same time as the identical arrow symbols match above BF. Miss doing it too many times in a row, and the health bar depletes and you lose. Good luck, enjoy!