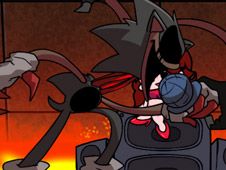 Unpixeled Sl4sh is a new variant of Sonic.Exe that you and Boyfriend can now fight off against in our category of FNF Games, something we are sure that you will really enjoy, even more so doing it on two new tracks:

Whether you're playing in the story mode or free play mode, you only win by reaching the end of the songs, something that is done by playing your notes according to the charts until you reach there. If you miss notes instead, after too many mistakes, the health bar depletes and you lose.

So, press the arrow keys at the same time as the identical arrow symbols match above BF. Missing notes happen when you press the wrong keys, get the timing wrong, or do not press them at all. Good luck, enjoy!