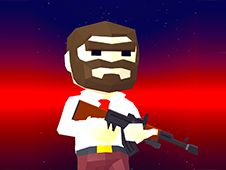 MiniPoly.io has a very important place on our website right now, since we're talking about one of the best new multiplayer shooting games in 3D added here, which uses the IO format, meaning that you are going to simply enter a username you want to use or pick to play as guest, and then go up against other similar players from across the world!

Your avatar and weapon at first will be assigned randomly, but you can buy specific ones down the line as you win matches and get kills since that brings along with them rewards such as coins that you can use in the shops.

You are thrown in an arena, and in a battle royale system, you have to shoot down other players and eliminate them, while being careful not to get shot down instead yourself. Collect diamonds to unlock new areas and powers.

Use WASD to move, hold shift to run, press space to jump, use the mouse to aim and shoot your guns, and press the R key to reload ammunition.

We wish you all the best, as in this kind of action-packed game, you really need it, and we hope to see you try even more of our daily content, as the day is far from over, and more awesome surprises are about to appear here for you!

Use WASD, space, shift, R, and the mouse.