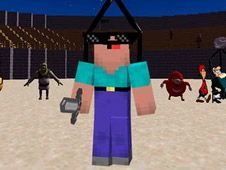 What is Noob Vs Memes 3D?

Noob Vs Memes 3D is one of the best new Minecraft shooting games online in 3D on our website, made even better by the fact that it is also a funny game all at the same time, since the enemies that you are going to face as the Noob, in first-person view, are various memes from across the internet, with Uganda Knuckles being one of the examples.

Use WASD to move through the arena, hold shift when you want to run faster, aim and shoot with the mouse, and press the R key to reload your ammo when you run out of bullets. Once you've shot down all the enemies in the battleground, you will have won, but if they hit you too much and you lose your health bar, you will be the loser instead.

But, good news, after you finish off some enemies, they leave behind health packs in the form of a cross, so make sure to grab them to replenish that health bar. With the gems you win from completing waves you can buy new weapons in the shop, a button right underneath the 'Play' one. Hit it, and let all the fun begin right away!

Use the WASD keys, shift key, R key, and the mouse.